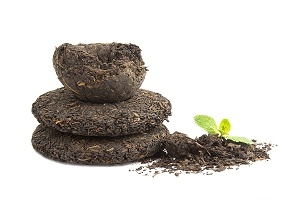 Disclosure: As an Amazon Associate, we at bestbuysJapan earn from qualifying purchases. We may receive additional revenues, at no extra cost to you, from other links you click to products or ads. Amazonのアソシエイトとして、bestbuysJapanは適格販売により収入を得ています。

What is Pu’er Tea?

Pu’er tea (pronounced ‘poor’) is a tea which is fermented and matured over either a long or a shorter period of time. It’s made from the same genus of tea plant as green tea, oolong tea, ‘English’ tea, and white tea variants.

Pu-erh tea uses the small leaf variant of the tea plant— the type traditionally grown in southern China and India. The bud is picked with 3 to 4 leaves while green tea is limited to 1 to 2 leaves. Therefore, pu’er tea is a combination of young and older buds.

Pu’er tea is a partially, free oxidized tea— compared to green tea which is largely unoxidized. Oxidation changes the color, flavor, and chemical composition of the tea.

The art of making Pu-erh tea also derives from southern China. Additional processes have been cross pollinated with methods now used in Hong Kong and Taiwan. Variants of the tea are also produced in Vietnam, Tibet, and Myanmar.

Both are common Anglicized versions of the Chinese 普洱. The name of the tea is the same  the Yunnan city of the same name (普洱市). The city is thought to be named after the tea.

Pu-erh (p‘u-êrh) is from the Wade-Giles romanization and is more classic variant of the word. The more popular variant is Pu’er or ‘puer’ and the one that most teas are marketed under.

There are two types of pu’er tea and both undergo fermentation, one slow and the other accelerated. Both use the same raw product called Máo Chá (青毛茶). This is a rough green tea which is lightly bruised in order to slow oxidation and then dried naturally.

Some Pu’er tea is sold as loose tea or in tea bags, but most Pu-erh tea is compressed  and aged into round, square, or rectangular bricks.

More humid climates in new Pu’er areas such as Hong Kong and Guangzhou produce teas from ‘wet’ storage. Sometimes the tea may be sprayed with water (Pen Shui 喷水) to accelerate the process. This, however, can make the tea more susceptible to unwanted molds and microbes.

Some raw Pu’re  teas can be matured for up to 10 to 15 years and often fetch premium prices. The long aging of Sheng Cha leads to secondary oxidation and further microbial fermentation.

Shou cha uses an accelerated process of fermentation and production developed in the mid 1970’s. Shóu (熟) has two meanings when translated from Chinese – one is ‘cooked’ and the other is ‘ripened’ – and product descriptions may use either term.

Sho Cha can be ready for the market within two to three years of production. The key process used is wet piling wò duī (渥堆). The leaves are composted by piling and dampening.

This accelerates microbial growth also from spore cultures on the piling surfaces. This ripening of the leaves takes from 45 to 60 days. If done incorrectly, hazardous molds and mycotoxins can develop.

Essentially, Shou Cha or wet-piled pu’er has a much higher caffeine content. It also has much higher levels of gallic acid. This is an antioxidant and anti-inflammatory compound that may also help in better metabolism, stress release, and cardiovascular health.

Green tea has significantly higher tea polyphenols and catechins. The difference in caffeine puts Pu-erh tea about 1% higher and ketones at 4% more. However, Pu-erh tea has higher levels of elements including trace metals.

Although many articles promoting pu’er tea will hype up on the numerous benefits outlined above, still, there is always the other side of the coin to consider.

The most abundant fungi in Pu-erh tea is Aspergillus. This is a common fungi found in fermented or rotted foods. *A German and Austrian study, however, investigated Aspergillus niger species present in Pu-erh tea for their ability to develop non beneficial mycotoxins.

The results showed that organically processed Pu-erh teas had much lower bad fungi counts, but tea leaf in tea bags was comparatively high in all cases.

The species Aspergillus fumigatus, which is considered a contaminant and danger to immunosuppressed individuals, appeared more frequently in loose teas, though significantly less in compressed tea cakes or bricks.

Microbial and potential toxicity levels in Pu-erh teas tested did not exceed recommended safety limits. However, loose leaves, and especially tea-bag teas are potentially the least safe. Compressed teas are better, and organically certified teas are recommended. It’s advised that immunosuppressed individuals should not directly handle the tea leaves.

How to Choose a Good Pu’er Tea

Teas that are organically certified or that have good manufacturing certifications are also a better choice. Try to research the tea company or go with trusted names and brands. Traditional long-aged Pu’er tea is more beneficial than cooked or ripened tea. It is, however, more expensive. Tea bags should be avoided if there is no guarantee of quality and safety.

Generally speaking, the caffeine content of ripened pu’er tea is similar to that of coffee. Caffeine levels are around 60 to 80 mg per the standard 8 oz cup (235 ml) whereas coffee can reach as high as 95 mg.

The caffeine content of raw aged pu’er is considerably less, and may even be less than green tea. That said, pu’er tea doesn’t produce the typical kind of edginess often associated with coffee.

If you’re looking for a low caffeine tea, then white tea is the best option— if you exclude herbal teas that don’t use the actual tea plant. White tea, otherwise known as nettle tea, only has between 10 and 15 mg of caffeine per cup.

How to Prepare your Pu-erh Tea

Brewing pu-erh tea can be as basic or as ornamental as you like. You don’t necessarily need a traditional Chinese tea brewing kit. It’s nice at least to have at least a gaiwan for the usefulness of the lid which traps in the steam to open the leaves for brewing after the rinse. With a gaiwan you can also forgo the need for a strainer.

Experiment with parameters incl. amount of leaf, brew time, temperature, and how you pour either around the bowl or directly on the leaf.

Before you get Pu erh brewing, we highly recommend you watch this video from our favorite Youtube tea channel Mei Leaf – How to Brew Puerh Tea – Masterclass:

This neat little package is one of the best deals, especially for beginners in Pu’er tea brewing. The tea comes in one serving toucha or tea nest balls. This way you don’t need a tea pick to break the leaves apart.

The 15 varieties include both raw and cooked or ripe Pu’er tea. There are different infused flavors such as rose, jasmin, lavender, honeysuckle, herbal ginseng and more. The flavored types are all ripe Pu’er.

Each serving is good enough for two to three infusions. Even if you’re a seasoned Pu’er drinker, this broad selection of flavored Pu’er is nice to have around.

Even though tea bags are not the best way to have your Pu’er tea, they are the most familiar and convenient. Tea bags tend to be popular with people who have little idea what Pu’er is really about.

The nice thing about these bags is that they are from a trusted Japanese Brand and the manufacturing process is GMP certified. The tea is from Guangdong province.

Steep for up to a minute for the first infusion, or you can make 1 liter of tea from one bag drawing from 2 to 3 minutes. You can drink it cold or hot.

If you want to get to try a fresh tasting Pu’er tea, then a more recent batch is the way to go. 2015 is about as fresh as it comes, and you can expect this tea to have a much lighter taste rather than deep, complex, and richer flavors.

The Anning Haiwan Tea Company is a high trust Yunnan brand. It’s founder, Zhou Bing Liang, learnt his skills at the famous Menghai Tea Factory — one of the most reputable names in Pu’er. Into the 1990s he set up his own company.

Tuóchá nest cakes are a great choice if you want to easily brew up a cup of Pu’er on the fly, when you travel, or even at work. They weigh a perfect 3g and there are 70 in a pack— so enough to easily last a couple of months for one person.

This selection is ripened or cooked Pu’er produced by the Six Famous Tea Mountain Company (六大茶山産) in the Year of the Dragon. The company was founded in 2002 by a Menghai factory manager.

They have over 16 200 acres of organic tea farm. Their teas have ISO and Chinese SC /QS certification for hygienic food and beverage hygiene. They have also won international awards for tea quality and safety standards.

If you’re not so familiar with Pu’er tea, it’s always a safe bet to go with anything produced by the Menghai Tea Factory. They are sold under the name 大益七子餅茶 meaning he Yunnan Dayi (大益) Seven Sons (七子) Factory or the Anglicized TaeTea brand.

They often sell their raw Pu’er teas with green labeling or packaging, and you will stress to find a raw tea under ¥4 000. This 2015 vintage is a good young tea only aged for three years before its release, so it’s a nice tea to also store away.

For more aged raw Pu’er tea from the esteemed Menghai Factory, these older vintages are also a good choice:

Bulang mountain is one of the most famous places for the production of organic Pu’er tea. Every Pu’er tea connoisseur is recommended not to miss trying these teas. Xin Yi Hao (新益号) is one of the best known producers in this area.

This ripened Pu’er tea has a reddish color and a smooth clear taste. There is no description of how long this tea has been aged.